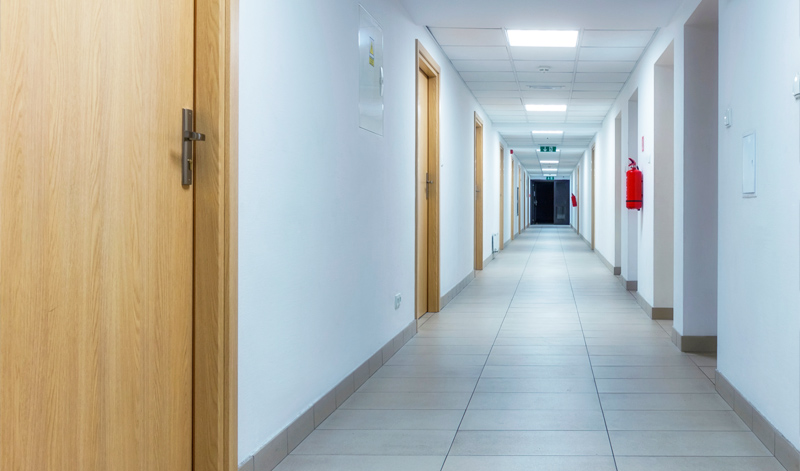 Multifamily building owners can reduce operating costs and increase property asset value by saving energy. Common areas — such as corridors — are a good place to start, but they often get passed by when it comes to energy efficiency upgrades. A study by the Lighting Research Center (LRC) found that upgrading these areas with dimmable LEDs improved energy efficiency while improving resident satisfaction.

Opening the door to energy savings

LRC conducted a pilot study at a below-market rate apartment building. Sixty corridor lights were upgraded from linear T8 fluorescents to LEDs controlled by integrated ultrasonic occupancy sensors. LEDs were rotated parallel to the corridor to improve light distribution on the walls.

Average illuminance was increased by a factor of three at 100% output, the setting when occupied. Most occupants were satisfied with the higher level of light and didn’t consider it to be too bright.

Energy savings were doubled compared to upgrading to fixed-output LEDs. The lower the dim setting when the corridor was vacant, the greater the energy savings. A shorter delay time (five minutes) also used 14% less energy compared to a standard delay time of 15 minutes.

The study and monitoring of 14 other apartment corridors also showed:

A step in the right direction

Building occupants were quite happy with the new lighting. Based on a survey, nearly 80% approved and didn’t object to dimmed lights when the corridors were vacant. Their perceived level of safety and comfort increased, partially because of improved distribution and uniformity. Many residents also liked how each light ramped up in output as they walked through the corridor.

Consider dimmable LEDs for other common areas, even busy locations like elevator lobbies. In this case, LRC found that proximity to lobbies increased the amount of time lights were at high output, reducing energy savings. However, dimmable LEDs still used about half the energy as fixed-output LEDs.